Steve Robinson is an ex-pat Brit now living in South Africa. The numerous fantastic collections of classic cars and motorcycles in South Africa re-ignited his lifetime interest in classic vehicles, so he started the Classic Vehicles website as a result.

Steve has always been a keen classic vehicle fan for the last 40 years and has owned, ridden, driven and/or raced many of what have now become classics.

Over the years, he has restored and/or rebuilt well over 20 classic motorcycles and 10 cars from scratch. From that time to current date, he has pretty much always had at least one on going project in his garage and the current ones are a Royal Enfield 700cc Constellation and an 1950s Chevrolet Apache pick up truck that is scheduled for restoration and installation of a 5.7 litre V8 AMC engine and a Jeep quadratrac 4x4 drive chain.

His personal transport is currently a 1982 Honda CB900F and a fully restored 1980 Jeep Wagoneer station wagon. He is a member of the Automobile Heritage Association in South Africa and the Classic Motorcycle Club of South Africa. He has previously worked as a motorcycle mechanic and in motorcycle sales and later as a commercial aircraft avionics engineer, mostly on the Boeing and Concorde fleets. Also for some years worked as an RAC/ACU motorcycle instructor and latterly also works in the safari industry.

Steve's other interests are light aircraft flying (which he does badly!), all aspects of African wildlife and wildlife photography. Many of his photographs have been sold to a wide variety of publishing houses for use in magazines and books. 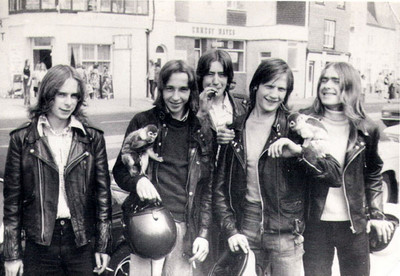 Return from About Us To Classic Vehicles Home