Tucker's Car Of The Future

Tucker's Car Of The Future is a tale of innovation, intrigue and double dealing...


Preston T Tucker was a salesman of note. He had worked for a variety of car dealerships, including Dodge and Studebaker and he'd even persuaded that notorious tightwad Henry Ford to finance Indy race cars in the 1930s. He was also a brilliant entrepreneur and in the late 1930s had designed a high speed scout car for the US military.

In 1947, he unveiled plans for what he called 'the most completely new car in fifty years'. He was right too. This car, dubbed the Tucker 48, aka the 'Tucker Torpedo' was designed by his friend and well-known designer Alex Tremulis. It was low and aerodynamically considerably more 'slippery' than anything that came before and had a drag co-efficient of just 0.27. This fastback, four door, six-seater saloon car was a little over 18 feet long and just 5 feet high. The vehicle was equipped with a water cooled, fuel injected, flat six horizontally opposed rear mounted 335 cubic inch, oil pressure operated OHV helicopter engine that produced 166 horsepower and was even blessed with independent suspension. 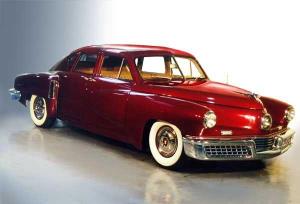 Tucker's Car Of the Future

Had time and money allowed, the car would also have been equipped with disc brakes and magnesium wheels. Many safety features far in advance of the rest of the motor industry of the time were also included in the innovative design. The Tuckers Car of the Future had oversized bumpers, turning central Cyclops headlamp that came on automatically whenever the steering was turned more than 10 degrees, recessed dashboard knobs and levers, a pop out windscreen and even a safety cage. The car was heavy at 4200 lbs, but despite that, it could still manage 0-60 in around 10 seconds, 120 mph, 20 miles per gallon and excellent road holding. Projected price was around US$4000. Expensive for the time? Sure it was, but this price was certainly in line with other quality cars of the period such as Cadillac. In short, the title, Car of the Future really was an accurate description.

Had this vehicle gone into full production with correct financing, theres no doubt that the car, the company and the man would have been wildly successful, but there is considerable evidence that other car manufacturers did all in their power to cut Tucker off from any kind of financing and its rumoured that a degree of industrial espionage might even have taken place.

Eventually Tucker lost patience and tried to raise approximately US$15M with what some suggested was a slightly dubious stock issue. This in turn led to an investigation by the Securities and Exchange Commission and resulted in Tucker and seven associates going to trial in October 1949 on over 30 charges of conspiracy and securities and mail fraud. With the help of a vigorous defense and what the jury later described as a farce prosecution, the group were acquitted of any wrong doing, but the damage was done and public confidence had been lost. Although the company still had the money to build the cars, no-one wanted to buy them and after building just 50 cars, including three softtops and one prototype, the company was forced to close its doors and call in the receivers who then auctioned of everything and realized just 18 cents on the dollar.

Later, Tremulis designed a new fastback coupe that he dubbed the Tucker Talisman as the car for the 50s, but this never went into production. Tucker then moved to Brazil and was planning a two seater sports kit car when he died on December 26th 1956 aged just 53.

In 1988, Francis Ford Coppola who is also a classic car collector and owner of a Tucker car of the future, released the film 'Tucker, The Man and His Dream' with Jeff Bridges playing the part of Preston Tucker. The movie isn't entirely historically accurate but is most certainly worth watching, and when you do watch it, don't burst into tears when you see the crash sequences. The cars used were replicas and not genuine!

Return from Tucker's Car Of The Future To Classic Vehicles Home