This motorcycle timeline is constantly evolving and the page is as much yours as it is ours, and we would truly appreciate any additions and/or corrections you might like to contribute. So please feel free to contact us.


There doesn't really appear to be a clear cut decision about who invented the first motorcycle and instead, it appears that similar ideas occurred to a variety of engineers around the same time and they all came up with pretty much similar products.

So lets take a look at the motorcycle timeline and see what we discover along the way. Ill try to keep it as short as possible for you and Ill restrict the timeline to the internal combustion engine and will ignore such oddities as steam driven motorcycles as they didnt really succeed in the evolution of the modern motorcycle. 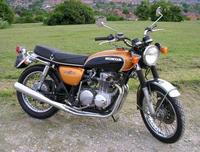