These classic motorcycle books are general books on classic, some not-so-classic and vintage motorcycles.....

The Motorcycle Manual by Roy Bacon (1977) 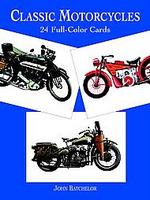 Improving Classic Motorcycles by Graham Blighe (2008) is a collection of modifications developed by the author over 30 years of riding BSA singles and Triumph twins. 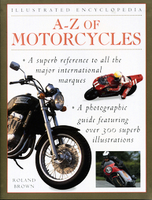 Illustrated Encyclopedia: A-Z Of Motorcycles by Roland Brown (1999) provides an invaluable reference and source book for both the new enthusiast and the most experienced and knowledgeable of motorcycle riders, historians and collectors. It consists of a marque-by-marque encyclopedia of models and manufacturers, both existing and antique. Every major marque is illustrated with photographs, displaying the beauty and originality of each machine. This unique collection of photographs is augmented by a comprehensive text that: details the technical specifications of the machines; describes key elements of design, performance features, and engineering standards; and comments on the unique qualities and attributes of each.

The Motorcycle A Definitive History: A Comprehensive Chronicle Of Motorcycles Throughout The World by John Carroll (1997) is both a history and a comprehensive listing of all the major motorcycle manufacturers of the 20th century. Listed alphabetically, each marque entry details the story of the company, the men who built it up and the bikes that established its reputation. In addition, a chronological order of the most significant and influential motorcycles from each of the most important makers is included. Each of the almost 300 individual machines has been allocated a specification chart, with its country of origin and the technical data of its design tabulated.

The Restoration Of Vintage And Thoroughbred Motorcycles by Jeff Clew (1978) is a comprehensive and profusely illustrated guide to the purchase, restoration and preservation of any motorcycle considered by its owner worth restoring, no matter what age, type or state.

Vintage Motorcycles by Jeff Clew (1995). After the close of the First World War, the British motorcycle industry rose to prominence as British motorcycles became almost unbeatable in competitions. However, a shortage of these new model bikes pushed prices to a premium and most people were forced to settle for prewar designs. These high prices led to greater competition, and greater competition lead to swifter and more innovative development. By the mid 1920s the overhead valve engine came into its own, with enhanced performance, and then the overhead camshaft engine with even greater potential. Internal expanding hub brakes kept safety in step with increased performance. The later 1920s brought about further significant changes when wired-on tyres came into general use and electric lighting replaced acetylene lights. Appearance was improved when chromium plating took the place of nickel and the saddle tank rendered the old flat tank superfluous.

The Complete Encyclopedia Of Classic Motorcycles by Mirco De Cet (2001) gives the histories and outputs of 100 notable motorcycle manufacturers. 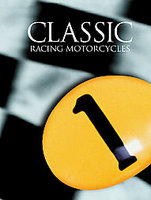 Classic Racing Motorcycles by Mick Duckworth (2003). Racing has always been at the forefront of motorbike technology and 'Classic Racing Motorcycles' profiles the all-time best of the breed. It features the bikes that were Grand Prix championship winners and major contenders across more than six decades of racing from the 1930s to the 1980s. Among the new technology which these machines pioneered are: overhead and double-overhead camshafts, telescopic forks, swingarm and monoshock rear suspension, two-stroke disc-valves, four-valve cylinder heads, liquid cooling, four and even six-cylinder engines and aerodynamic fairings.

Classic Motorcycles by Mark Gardiner (1997) is a great history of motorcycles from the turn of the century to the late eighties or so.

Riding Man by Mark Gardiner (2007) is a moving description of an average motorcyclist's dream of participating in the world's greatest motorcycle race.

The Encyclopedia Of The Motorcycle: The Ultimate Reference And Comprehensive Companion For Motorbike Enthusiasts by Peter Henshaw (1999) is a comprehensive listing of the world's motorbikes.

Classic Bikes by Peter Henshaw (1995) chronicles the evolution of the motor bike. From the pre-war Indian to the big-tanked BMW's, the cultic Harley Davidsons and the revvy Hondas here in one extraordinary volume.

The Encyclopedia Of Motorcycles Vol. 1: Abako - Dihl by Peter Henshaw (2000)

The Encyclopedia Of Motorcycles Vol. 2: Dilecta - Honda by Peter Henshaw (2000)

The Encyclopedia Of Motorcycles Vol. 4: Motom - Supremoco by Peter Henshaw (2000)

The Encyclopedia Of Motorcycles Vol. 5: Suzuki - ZZR by Peter Henshaw (2000) 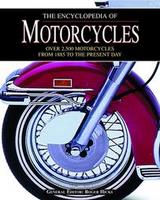 The Encyclopedia Of Motorcycles by Roger Hicks (2001) features over 2500 motorcycles from 1885 to the present day. 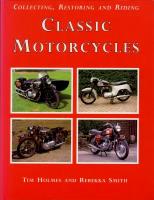 Collecting, Restoring And Riding Classic Motorcycles by Tim Holmes and Rebekka Smith (1995) is a thorough guide to the best in the fascinating field of old motor bikes. 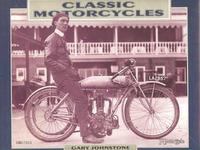 Classic Motorcycles by Gary Johnstone (1993) celebrates the cut and culture of motorcycling. It is a winding journey through the 20th century, seeking out the essential factors which shaped the unique design of the true " classics" of the motor cycle world and which defined the motorcycle "heritage" of each country.

The Keig Collection - A Picture Gallery Of TT Riders & Their Machines From 1911 To 1939 by S Keig & Bob Holliday (1975) are two volumes of photos from the Manx-based photographer S R Keig's collection. 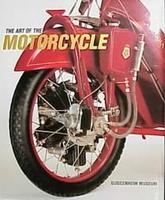 The Art Of The Motorcycle by Thomas Krens (1998). Capturing the spirit of the motorcycle and the passion and excitement it has aroused, this book brings together 100 spectacular motorcycles from the first, the 1885 Daimler Einspur, through to the latest in cutting-edge concept bikes.

Classic Motorcycles Stickers by Bruce Lafontaine (1998). Motorcycles are in the midst of an extraordinary wave of popularity; recognized as design icons, they are popular even with people who extraordinary don't ride them. This new sticker collection features twelve large, full-colour sticker illustrations depicting such time-honoured cycles as a 1905 Indian, a 1928 Norton, a 1936 and 1951 Harley Davidson, a 1990 Suzuki GSX, and more. These handsome peel-and-apply images are perfect for storing in that box of treasured collectibles, decorating lunch boxes and lockers, and enhancing a host of other flat surfaces. A key to the sticker illustrations is included. 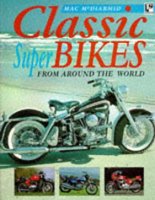 Classic Superbikes From Around The World by Mac McDiarmid (1995) traces the development of the superbike during a period rich in two-wheeled history - from the awesome Vincent 1000 to the six-cylinder Benelli Sei.

Motorcycles: Classics And Thoroughbreds by Roberto Patriqnani & Mario Colombo (1971) is dedicated to those who have just discovered the motorcycle, as an introduction to the most representative and prestigious models in the world.

Ner-A-Car by Ken Philip (2002) is mainly concerned with the English production but will there will be references to the American operation where necessary. The author's involvement has been mainly with four machines, a Model A of 1921, a Model B of 1926, a Model C of 1925, and an American-built 1925 model sold when new in France. In 1997, life-long motorcyclist Ken Philp was given the opportunity of being the first to ride a restored 1921 Model A provided that he traced its chassis number. The book starts off as the account of that task, but it develops into an account of their English history and production, with frequent reference to the U.S. history as well. It continues on to include details of the various models manufactured, and experiences of restoring three different models, and of preparing a Model B, loaned by a Museum, for the 2001 Banbury Run. Not only are there accounts of feats undertaken in the 1920's by both men and women, but it includes the story of the 2001 Banbury Run, in which a total of 11 were ridden. There are also accounts of other rides undertaken by the author and others, together with experiences with them over the years 1998-2004. 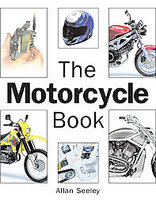 The Motorcycle Book by Alan Seeley (2004) is a comprehensive reference source for all motorcycle owners and enthusiasts. From mopeds to sports bikes, through tourers and commuters, all aspects of buying, riding and maintaining a bike are included. Whether you're a beginner or an experienced rider, you'll find the details you need to get on the road and stay on the road. Includes detailed sections on how your bike works and how to keep it running, with detailed maintenance and trouble-shooting chapters.

A Rider's And Investor's Guide To Antique, Classic And Used Motorcycles by Ford Taylor (1997). Whichever motorcycle(s) you invested time and money into yesterday may not be the same today and tommorrow. Learn why the next decade of demands will surprise you...full of hidden treasures, including newer power plants. Short-term and long-term motorcycle lists provide insight the serious collector's acquisitions...a must for any motorcycle enthusiast....from the daily rider to the museum connoisseur. 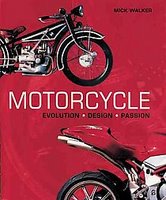 Motorcycle: Evolution, Design, Passion by Mick Walker (2006) is the definitive, comprehensive guide to motorcycle design. Tapping a deep well of knowledge and a lifetime of experience, motorcycle racer and historian Mick Walker sheds light on the evolution of one of the world's ultimate status symbols and style icons - a development owing as much to history, politics, and technology as it does to image, lifestyle and design. In a survey that ranges from the late nineteenth-century pioneers like Gottlieb Daimler and Hildebrand & Wolfmuller to present-day manufacturers - Harley Davidson, Ducati, Honda, BMW, Aprilia, and Triumph - Walker sets each model within its historical context and outlines the main technological and stylistic innovations that make each bike unique.

Mick Walker's European Racing Motorcycles by Mick Walker (2000). While the history of European competition motorcycles has been largely dominated by Italian, British, and German marques, other builders around the continent have also played significant roles from the turn of the century to present. Arranged by nation, this book examines more than two dozen important marques, including Bultaco, CZ, Elf, Husqvarna, KTM, Ossa, Peugeot, and many others. A wealth of rare photography, including a special color section, includes candid shots of the top personalities and the bikes both at rest and at speed. 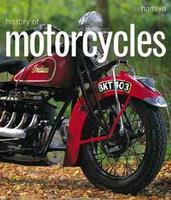 History Of Motorcycles by Mick Walker (2000) takes in motorcycling from its early, hesitant start, focusing on all the pioneers of the sport; moves through the war years and after, when Japan emerged as a major manufacturer; presents the thrill of grand-prix and road racing; and checks out today's newest, high-performance road machines and tourers. The makers whose top-of-the-line cycles appear include Harley-Davidson, BSA, Norton, Indian, Honda, Kawasaki, Yamaha, and Triumph. Also covered: classic retros, customizing, speedway, the TT races, and world speed record machines.

Classic Motorcycles by Mick Walker (1995) pinpoints the finest aspects of over 150 bikes. 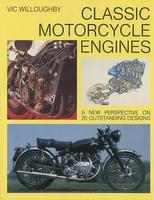 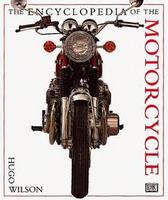 Encyclopedia Of The Motorcycle by Hugo Wilson (1995) is an extensive reference features a photograph gallery of classic motorcycles, a manufacturer listing that profiles every maker in the industry, design blueprints for special models, and production histories 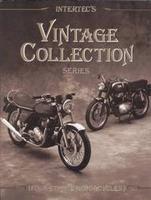