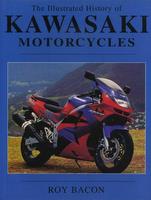 The Illustrated History Of Kawasaki Motorcycles by Roy Bacon (1995) 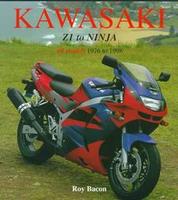 Kawasaki Z1 To Ninja by Roy Bacon (1998) reviews the early years of Kawasaki motorcycles with special emphasis on the history of those models built from 1976 to the present. 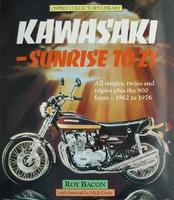 The Story Of Kawasaki Motor Cycles by Peter Carrick (1978). From analysis of early beginnings, goes on to describe the road-going bikes, speed record attacks, motocross and trials, triumphal performances in the classic Bol d'Or and other endurance races, and the status of Team Kawasaki. From the raw power of early Kawasakis to the highly sophisticated thoroughbreds of the present range (1978); the early world championship; first time success in the Superbike championship; and the giant sales growth throughout the world - all and more more are included. 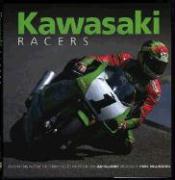 Kawasaki Racers: Road-Racing Motorcycles From 1965 To The Present Day by Ian Falloon (2002) 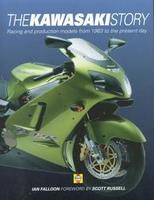 The Kawasaki Story: Racing And Production Models From 1963 To The Present Day by Ian Falloon (2000). Although it is Japans smallest motorcycle manufacturer, Kawasaki has had a huge impact on the motorcycling world. Here is the full story of this famous marque, including road and competition bikes. Includes the history of the Kawasaki company; chronicles the early racing days; Kawasakis two-stroke production bikes; the Green Meanies - the HR version of the 500cc four-stroke; the highly successful Superbike and Endurance racers of the 1970s; and the bikes of the 1990s which ushered in a new era of performance up through the ZX-12R introduced for 2000. 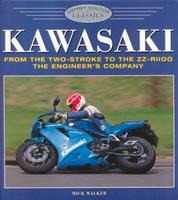 Kawasaki: From The Two-Stroke To The ZZ-R1100: The Engineer's Company by Mick Walker (1997). A full-colour look at a wide range of Kawasaki's best bikes. Exceptional photography and expert descriptions combine to tell the story of every motorcycle from motocross to F1 superbikes. 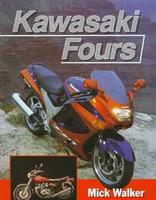 Kawasaki Fours by Mick Walker (1998) is the story of the design, development and production of Kawasaki Fours. Starting with the Z1 of 1973 and continuing through to the retro-styled Zephyr range, Mick Walker provides an insight into an influential and ongoing part of motorcycle history. Topics include: background of the company; development history; full specifications of major models and additional coverage of the Z1300 six.

Kawasaki by Mick Walker (1993) covers a wide range of models, and shows details of how quality is engineered into the Kawasaki motorcycles. In this book, trial bikes are well represented, as well as the legendary Z1, and the fastest production motorcycle in the world, the ZZ-R1100.