Here are the classic Indian motorcycle books, journals and manuals covering the Indian bike history, restoration, advertising and the great battle with Harley-Davidson.

The Indian Motocycle Manufacturing Company is a motorcycle manufacturer in Kings Mountain, North Carolina. Indian is America's oldest motorcycle brand and was once the largest manufacturer of motorcycles in the world. 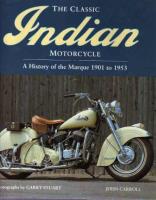 The Classic Indian Motorcycle: A History Of The Marque 1901 To 1953 by John Carroll (1996) is the history of one of the most famous marques in the history of motorcycling who forged a reputation for high quality, innovative engineering and for race-winning success. 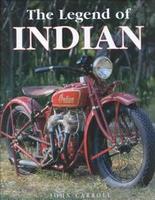 The Legend Of Indian by John Carroll (2001) explores the history of the Indian brand from its early origins to the late models and includes a chapter on the British-built Indians of the 1950's. 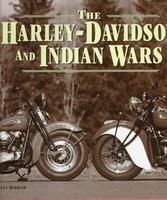 Rebuilding The Indian: A Memoir by Fred Haefele (1999). Constructing a vintage Indian motorcycle from a box of parts is more than the restoration of a bike for Haefele - it's the resurrection of a dream. 'Rebuilding The Indian' chronicles one man's journey through the fearful expanse of midlife in a quest for peace, parts, and a happy second fatherhood. 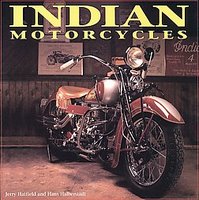 Indian Motorcycles by Jerry Hatfield (2007). What began as a motorized bicycle dreamed up between a young machinist named George Hedstrom and a champion cyclist named George Hendee, became one of the most popular motorcycles in the world: the Indian. Out of production for half a century it retains the loyalty and admiration of motorcycle riders and enthusiasts everywhere. This book recounts the story from its earliest single-cylinder motocycles of 1901 through to 1953 when the company closed. 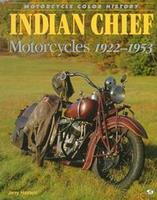 Indian Chief Motorcycles 1922-1953 by Jerry Hatfield (1997) is the colourful history of the Indian Chief, one of today's most collectible and coveted vintage motorcycles. Hatfield's fascinating account of this legendary motorcycle is accompanied by previously unpublished historical photographs and new colour photography. Model evolution, technical data, behind-the-scenes factory information, and racing history are all covered. 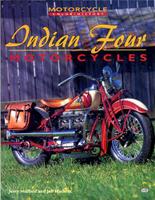 Indian Four Motorcycles by Jerry Hatfield (1998). Written With Jerry Hackett. As Indian''s premier model and one of the most desirable bikes among today''s collectors, the Four represents the manufacturer's departure from the marketplace in 1942. This colour history looks at restored Fours and chronicles it's design and production. 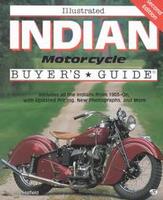 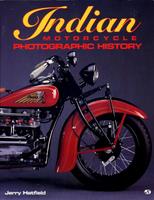 Indian Motorcycle Photographic History by Jerry Hatfield (1993) tells the tale of the great Indian motorcycles in over 450 colour and black-and-white photos. Here is the Indian legend, from the first bicycle-derived "motocycles" of 1901 to the famous Chiefs, Scouts and Fours and on to the firm's closing in the 1960s. 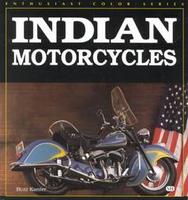 Indian Motorcycles by Buzz Kanter (1993). The all-American motorcycle featured in 80 fabulous, full-colour shots. Perfectly restored bikes and a few original classics, tell Indian's history in sensational style. Includes bikes of every decade with a text that relates their most fascinating details.

Indian Motorcycles by Jim Lensveld (1997). This oversize first edition presents the history of Indian motorcycles from the 1908 two cylinder V-twin to the 1959 Bastard mostly in full colour photographs. 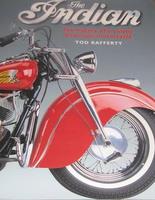 The Indian: The History Of A Classic American Motorcycle by Tod Rafferty (1998). There is magic in the name 'Indian' proclaimed the ads, and thousands of motorcycle enthusiasts around the world would agree. Early this century Indian was the pre-eminent American motorcycle as Harley-Davidson struggled to make inroads into the market. The machines themselves have an elegance and visual style that sets them apart, ensuring that they are among the most collectible. This book presents an unparalleled history of the company, with superb studio photography of all the significant models built from 1901 to the company's demise in 1953.

Indian by Garry Stuart and John Carroll (1994). This photographic history of the Indian motorcycle marque, which once rivalled Harley-Davidson in the US motorcycle market but which killed itself off attempting to steal a piece of the middleweight market from British manufacturers Norton and Triumph, describes the design and manufacture of a highly attractive breed of bikes, and takes a visual tour of successive models in use today.

The Iron Redskin: History Of The Indian Motorcycle by Harry Sucher (1977). The Indian has a cult following similar to the Harley, an out and out showman's bike with muscle to match. These American machines have a history going back to the turn of the Old Century and have always been competitive in all forms of motor cycle sport. 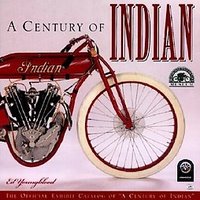 A Century Of Indian by Ed Youngblood (2001) was produced as a companion to the American Motorcyclist Museum Indian motorcycle exhibit, in July 2001, this beautiful visual narrative showcases the elegant design and quality workmanship for which Indian became famous. Both production and race models are featured, as are photo collages of Indian memorabilia and evocative archival images.

Indian Dispatch-Tow, A New Profit Opportunity 1931.An advertising pamphlet for the Indian 3-wheeled Dispatch-Tow. A fine copy of this ephemera.

Indian, Pride Of The Force c.1930. An advertising pamphlet for Indian's 'Police Special' Motorcycles, two new Indian police motorcycles with outstanding features (Indian 4 & Indian Chief 74). Also a description and illustration of the armoured car, police dispatch car and police sidecar. Dramatic colour illustration on cover of a military or police man head on, driving the Indian model being advertised. Illustration of the Indian factory on back cover.

Honest Injun: Indian Motorcycles 2008 Reprint. Special 1916 catalogue Australasian edition. Introducing "Powerplus" greatest of all Indians and the factory and men behind it.

Rider's Instruction Book For All Models (Except Vertical Models) 1951