Aermacchi motorcycle books covers the history of Aermacchi and the relationship with Harley-Davidson.

Aermacchi started to manufacture motorcycles in 1951. The bikes were quite successful in the postwar Italian market due to their repeated placements on the race tracks. 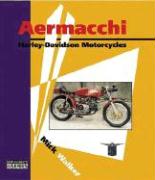 Aermacchi Harley-Davidson Motorcycles by Mick Walker (2005). Covering the Italian Aermacchi Harley-Davidson marque, charts the history of the Varese-based company, which produced some of the truly magnificient motorcycles. From the immediate post World War II era until well into the 1970s Aermacchi, together with its business partner Harley-Davidson from 1960, built a range of motorcycles which were admired world-wide. This was largely due to to the marque's support of the motorcycle sport, originally in trials, motocross and record breaking, but from the late 1950s road racing.