This is the definitive collection of classic Ducati motorcycle books covering all models with a vast list of owner's manuals.

Ducati is a privately owned Italian motorcycle manufacturer located in Bologna, Italy. It was founded in 1926 by three brothers, Adriano, Marcello and Bruno Ducati. 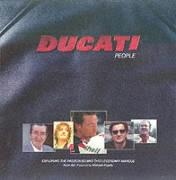 Ducati People: Exploring The Passion Behind This Legendary Marque by Kevin Ash (2001) All motorcycle enthusiasts know of Ducati, but now for the first time is a behind-the-scenes look at the people who make this machine tick. Written by a top motorcycle freelancer with Ducati's full cooperation, this all-color book bursts with information, opinion and anecdotes. It introduces everyone from the bosses of the Texas Pacific Group that bought Ducati in 1998, to Ducati workers, dealers, suppliers, enthusiasts and, of course, racers. 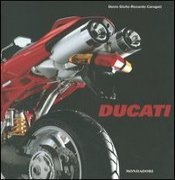 Ducati: Design In The Sign Of Emotion by Decio Carugati (2005) 13 classic models in Bologna Museum of the legendary Italian motorcycle, the Ducati, from the 1946 Cucciolo to the 2003 Sportclassic - text by noted Italian author of books on design. 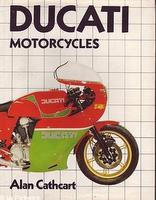 Ducati Motorcycles by Alan Cathcart (1989) tells the full story of the bikes and the men who worked with them - never before has such an 'impossible' story been put together. Discover numerous machines previously unheard of and learn of the quirkiness of the company's operations. Delight in the anecdotes which makes Ducati's history so enjoyable, but above all indulge in this fantastic array of stylish motorcycles as only the Italians, Ducati come that, can produce.

Ducati 999: Birth Of A Legend by Alan Cathcart (2003) describes the unique way in which all new Ducati motorcycles are designed, developed and manufactured. Rich with in-depth interviews and never before published drawings and renderings, this book takes you on a lavishly illustrated factory tour.

Ducati: The Untold Story, Factory Racers, Prototypes and Specials by Alan Cathcart (1987). Factory prototypes never put into production, works racers which have escaped into private hands, others pictured during their active racing career, ingenious and often remarkably professional specials wrought by privateers on the basic Ducati theme, future road models seen at the time of their pre-production track tests or press launch - all these are shown in photos printed here which have been collected over a 20 year period. 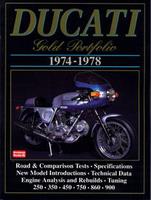 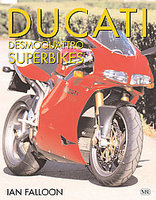 Ducati Desmoquattro Superbikes by Ian Falloon (2002). Ducati stunned the world when the struggling little Italian firm unleashed its Desmoquattro (eight-valve, desmodromic) Superbike on the racing world back in 1988. The bike found success on the worlds racetracks right from the start. Road-going versions soon carried that success to the general public, proving this design wasnt just another noisy prototype. The Superbikes (the 748, 851, 888, 916, and 996) are now Ducatis best selling machines in the United States, and the Desmoquattro engine has now found its way into the more pedestrian series like the Monster roadster and ST4s sport-tourer. 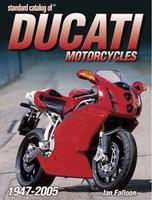 Standard Catalog Of Ducati Motorcycles 1946-2005 by Ian Falloon (2005). Ducati enthusiasts will love this great combination of well-researched data and true-to-life photography of the prestigious motorcycles. 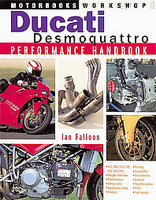 Ducati Desmoquattro Performance Handbook by Ian Falloon (2003). Ian Falloon, the world's foremost authority on Ducati motorcycles, delivers a performance handbook that is a must-have garage reference for any Ducati rider or enthusiast. This book offers specific tuning tips for Ducati's Desmoquattro superbikes that have ruled the world's streets and racetracks for the past two decades. Readers will uncover a remarkable amount of information, including charts that list specific suggestions for each model's system and a section that lists the most productive ways to spend money on a particular model.

The Ducati Story: Racing And Production Models From 1945 To The Present Day by Ian Falloon (1997) is a history of this famous Italian marque whose following in Britain was given a further boost when British rider Carl Fogarty won the 1994 and 1995 World Superbike Championships on a Ducati 916. The book covers every Ducati racing and production motorcycle from the cheap, post-war Cucciolo to the 916. Every model, from the 125cc grand prix bike through to the 900cc Super Sport is analyzed along with the unique valve gear of Ing. Ducati heroes Mike Hailwood, Tony Rutter and Carl Fogarty are also featured. 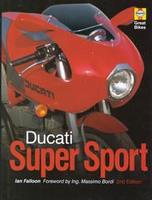 Ducati Super Sport by Ian Falloon (2000). The modern Superbike era began in the 1970s, and was long dominated by Italian marques, particularly Ducati's 750 and 900 Super Sport. Since then, Ducati has produced a long series of sporting bikes, several of them among the most desirable motorcycles ever built. 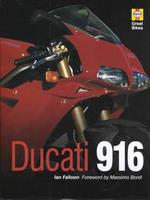 Ducati 916 by Ian Falloon (2001) This all-colour book describes the entire history and development of all racing and production 916s. 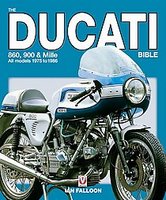 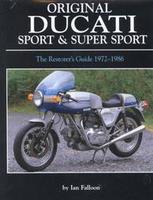 Original Ducati Sport & Super Sport: The Restorer's Guide 1972-1986 by Ian Falloon (2001). The Ducati Sport and Super Sport are the most-prized collector motorcycles in the world. Built for racing performance, the cycles are relatively rare, always attract attention and command top prices. This book focuses on all the bevel-drive sport models from 1972 to 1986, including the 750 Sport, 750SS, 900SS, 900 Darmah SS, Mike Hailwood Replica and the 1000 S2. 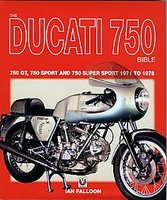 Ducati 750 Bible by Ian Falloon (2006). When Ducati's great engineer Fabio Taglioni designed the 750 Ducati in 1970 there was no way he could comprehend how important this model would be. His design was unlike any other before or since; a 90-degree V-twin with single overhead camshafts driven by a train of bevel gears. 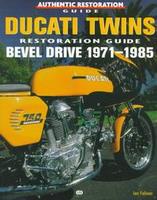 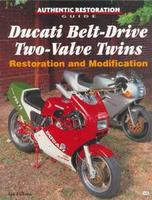 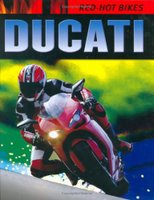 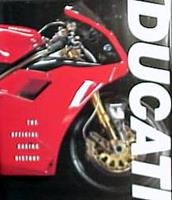 Ducati: The Official Racing History by Marco Masetti (2000). In order for new generations of ducatisti to understand the legacy of this legendary motorcycle marque, the company erected a museum at the heart of their manufacturing facilities in just a few months' time. This marvelous collection is a tribute not only to that museum, but also to the company and the motorcycles.

Motociclismo Tells The Story Of Ducati by Marco Masetti (1997). With Luigi Bianchi. Photographs and commentary on street, off-road and competion models, engineering, designers, riders, races, records, roadtrips and advertising from 1946 to the present.

Ducati: 50 Golden Years Through The Pages Of 'Motociclismo' Magazine by Marco Masetti (1999). Because of Ducati's notorious lack of record-keeping, the material that appeared in Motociclismo over the course of 50 years comprises the maker's only 'complete' production and competition history. Outstanding photography, commentary and period ads chronicle Ducati's street, off-road and competition bikes and engineering feats.

Ducati: A Motorbike, A Myth, A Museum by Marco Masetti (1999) covers every significant racing Ducati model and their most successful professional riders up through the late 1990s. 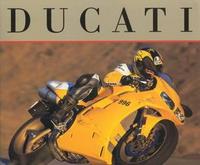 Ducati by Tod Rafferty (2000). This coffee-table history offers enthusiasts a fantastic story that spans a half-century while taking care to strike a balance between the the companys involvement in both the European and North American markets. While the emphasis is on the engineering and design the book also features the involvement of some of the biggest names in the history of motorcycle racing. 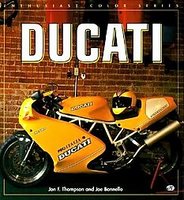 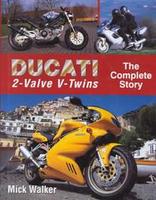 Ducati 2-Valve V-Twins: The Complete Story by Mick Walker (2000) charts the development and production of Ducati's formidable two-valve V-twins, from their introduction in 1970 to the current models. In addition to offering an expert technical discussion, Walker examines key personalities in the development of Ducati two-valves and presents a generous selection of archival and modern photography. 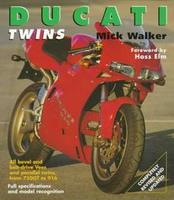 Ducati Twins by Mick Walker (1999). Updated edition of the full production development history of Ducati twin-cylinder motorcycles, from both Bologna and Barcelona. Models covered include: the 750 series, 900SS, Mike Hailwood Replica, 860, 900GT and GTS, the Darmahs and the Pantahs. The extra 60 pages of this edition include coverage of the 916 under the Cagiva umbrella. 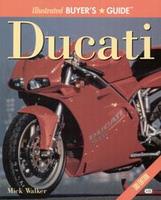 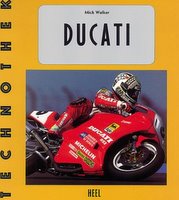 Ducati - The Racing Story by Mick Walker (2002). This well-researched fact-filled book features full-colour photographs throughout, and includes individual models, teams, and riders that helped create the company's legendary status in the racing world.

Ducati: Classic Motorcycles by Mick Walker (1993). From the earliest singles of the 1950s to today's elegant 916, the Bologna marque has consistently built some of the world's finest and fastest motorcycles.

Ducati 4-Valve V-twins: The Complete Story by Mick Walker (1999) charts the complete development and production of the formidable Ducati 4-Valve V-Twins. Covering developments on both road and track, Walker also charts the troubled history of a company that nearly disappeared, only to pull itself back from the brink and go on to become one of the motorcycling world's key players. Includes coverage of the 851, 888, 916, 996, 748 and ST4. Contains full specs and a detailed part-by-part engineering chapter.

Ducati: Taglioni And His World Beating Motorcycles by Mick Walker (2000) explores and celebrates the unique contribution to motorcycle development and history made by Dr Taglioni. The book gives a fascinating insight into the impact of one man on the evolution of the modern motorcycle, and it will be essential reading for Ducati enthusiasts and for all those who have a sense of motorcycling history

Ducati Desmo: Making Of A Masterpiece by Mick Walker (1989)

Ducati Twins Restoration by Mick Walker (2003). Some 30 different models of Ducati twin-cylinder motorcycles are covered in this comprehensive restoration guide. Combining his own expertise and experiences with those of Ducati enthusiasts the world over, Mick Walker clearly explains all you need to know to restore Ducati's bevel-driven V-twins, belt-driven V-twins, and parallel twins.

Check for the manual you need from hundreds of Ducati Manuals