Brough Superior motorcycle books cover the complete history of George Brough and his superior machines. Plus there are some manuals and brochures. 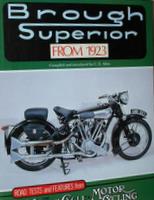 Brough Superior: The Rolls-Royce Of Motorcycles by Ronald Clark (1998). This complete story of the most distinguished name in the history of British motorcycles was written with the full cooperation of the Brough works and of George Brough himself. For more than 30 years, it has been the definitive book on Brough Superior, containing a wealth of technical data, archival photographs, cutaway drawings, diagrams, and nine detailed appendices of engine specs and competition histories.

Two Superiors: The Motorcycling Friendship Of T.E. Lawrence And George Brough by Richard Knowles (2005) tells the story of Lawrence's relationship with both his motorcycles, motorcycling and with the eponymous maker George Brough. It traces his early motorcycle experience and details the seven Brough Superiors that he owned and the eighth on order at the time of his death.

Brough Superior SS100 - Super Profile by Colin Simms (1984). George Brough demanded perfection with high performance, and his masterpiece is the SS100, variants of which model (and no two are precisely alike) were long his personal steeds as they were also for other discriminating and demanding riders, Lawrence of Arabia amongst them. Scarce and costly, Brough Superior production ceased in 1940. Since 1924 only about 384 SS100 had been built.