Norton is a British motorcycle marque from Birmingham, founded in 1898 as a manufacturer of cycle chains. By 1902, they had begun manufacturing motorcycles. 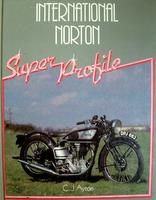 International Norton by Cyril Ayton (1985). A superbly-illustrated study of the Norton motorcycle, an name which is part of racing history - particularly of Isle of Man racing history. It presents every facet of its character by word and picture, building up a full portrait of the Norton by describing its history, production changes and specifications.

Norton from 1946: Road Tests And Features From Motor Cycle And Motorcycling by Cyril Ayton (1988). A large selection of Norton road tests and features reproduced from the pages of 'The Motor Cycle' and 'Motor Cycling', the two great journals of the heyday of motorcycling spread over the period 1946 to 1968. 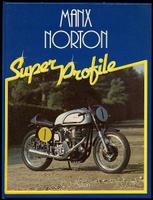 Norton Dominator Twins: 1949 - 1970 by Roy Bacon (1990). History and detailed specification of just this one Model from the Norton Stable: The Dominator Twin. 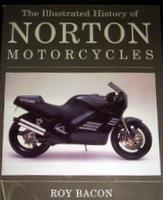 The Illustrated History Of Norton Motorcycles by Roy Bacon (1996)

Norton Commando, All Models by Roy Bacon (1989). The Norton Commando was produced between 1968 and 1977 following a September 1967 launch. It was built in a dozen different forms over the years but all used the same twin-cylinder engine derived from that designed by Bert Hopwood back in 1948. That had first appeared as the 497cc Dominator but had been stretched, in stages over the years to 745 cc for the Atlas and it was this form that went into the Commando and, in time, was enlarged further still. This book covers ; the launch Commando, into production, the 850 Commando, road racing and specials, the Interpol and specifications. 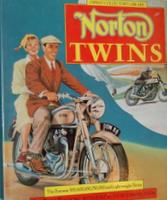 Norton Twins - The Postwar 500, 600, 650, 750, 850 And Lightweight Twins by Roy Bacon (1981) is a detailed development history of those lovely classic Twins: model 7, 88, 77, 99, 650, Atlas, Commando, plus the Lightweights, the Wulf, the Wankel, the Cosworth and the dressed-up AMC Nortons D. There is model by model and year by year detailing, specifications, colours, prices and competition.

Norton Singles OHV & SV: 1931 - 1966 by Roy Bacon (1995). The lineage of both side-valve and overhead-valve Norton singles can be traced back to the earliest days of the company. The final forms of both engine types were adopted for 1931 and continued, with minor changes, for some thirty years.

Norton Commando Super Profile by Jeff Clew (1983). There are chapters on the history and evolution of this motorcycle, details of specification, road tests and information on buying and specialist clubs. 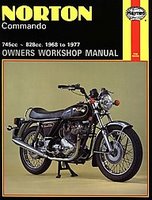 Norton Commando by MIck Duckworth (2004). The Norton Commando is arguably Britains most well-developed twin-cylinder motorcycle. Launched in 1967, it was an outstanding sales success, both at home and overseas, and is still a practical means of transport today, with expert service and spares supply available. Here is a detailed history and owners guide to this famous machine, including contemporary reaction to its launch, model changes, buying tips and technical specifications.

Norton Motorcycles: A Practical Guide Covering All Models From 1932 by E M Franks (1948) includes illustrations dealing with all aspects of the motor and transmission of the Norton motorcycle.

The Book Of The Norton (1938 to 1956) by William C Haycraft (1958) is a practical guide on the handling and maintenance of all 1938-56 SV and OHV single-cylinder Nortons except trial models.

The Book Of the Norton: Illustrated Workshop Manual 1932 - 1939 by William C Haycraft (2007). An Illustrated Workshop Manual Covering Pre-War Norton Single-Cylinder Motorcycles From 1932 To 1939. This is a faithful reproduction of the Floyd Clymer (W.C. Haycraft) 'Book Of The Norton' originally published in the US in 1947. It includes repair and maintenance data for rigid frame pre-war, single cylinder SV, OHV and OHC Norton motorcycles from 1932 to 1939. Much more detailed than the owner's handbook, this manual provides the information necessary for the overhaul of engines, carburetors, clutches, gear boxes, forks, electrics, etc., essential information for the enthusiast, owner or restorer of these classic motorcycles. Applicable To The Following Models: SV: 16H & 16I. OHV: 18, 19, 20, 50, 55, and ES2. OHC: CJ, CSI, International models 30 and 40. Includes Maintenance And Repair Data For The Following Engines: Single Cylinder SV: 490cc and 633cc. Single Cylinder OHV: 350cc, 490cc and 596 cc. Single Cylinder OHC: 348cc and 490cc.

Norton: The Story by Bob Holliday (1972). The history of the company from the formation of the Norton Manufacturing Company in 1893 right up to the merger with Villiers Engineering, the production of the famous Commando and the birth of the John Player - Norton racing team. 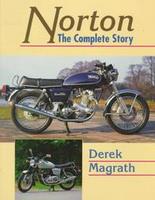 Norton: The Complete Story by Derek Magrath (1991). Norton is one of the all-time classic names in motorcycling, and for many enthusiasts will always be associated with a golden age when British motorcycles were the best in the world. This illustrated comprehensive history tells the fascinating story behind the marque and includes the earliest designs in the first years of this century, such as the Energette, the great pre-war and postwar machines such as the Model 30 and Dominator, and the revival of the Norton name with rotary-engined machines and the F1.

The First Knocker Norton Scene (All Years SOHC & DOHC) by Bruce Main-Smith (1979). Written as a tribute to the Norton motorcycles of the 1970's known to the enthusiast as `knockers'.

Norton Rotaries by Kris Perkins (1991) is the story of a technological act of faith that paid off: the revolutionary engine that gave the British Motorcycle Industry a fighting chance - and returned the famous Norton marque to the track.

The Pictorial History Of Norton Motorcycles by Jim Reynolds (1985). The unique range of photographs in this book tell the Norton story in full. 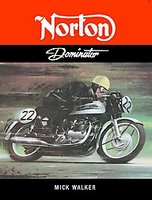 Norton Dominator by Mick Walker (2006). The Norton Dominator - often commonly referred to by its owners as the Dommie - was designed by Bert Hopwood; making its debut in late 1948. What really made it stand out were several interesting features such as widely splayed exhaust port, suitability for tuning and its future development potential. Later, when equipped with the renowned, race-developed, Featherbed frame and Featherbed telescopic forks, it became a sporting icon.

Norton: The Racing Story by Mick Walker (2002). This comprehensive history of Norton Racing tells the complete story of these legendary machines on both two and three wheels. The lively text and period photographs provide a perfect tribute to, arguably, Britain's finest racing motorcycles. 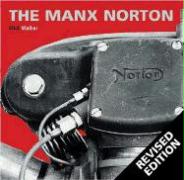 The Manx Norton by Mick Walker (2005). The most famous of all British racing motorcycles, with an ancestry dating back to the very dawn of the internal combustion engine, the 'cammy' Norton is inseparable from the era of British domination in motorcycle racing. It is linked with the legendary heroes of the sport, Jimmie Guthrie, Harold Daniell, Geoff Duke, John Surtees, Mike Hailwood and the age when Britain had the world's finest motorcycle industry. This revised edition of the definitive history contains additional material and traces the design, development, the leading riders and tuners. It presents a superb collection of photographs, many previously unpublished. The Manx Norton covers not only the Manx itself, but also features boardroom battles, Norton's early history, record breaking, sidecars, Formula 3 cars, scrambling (motocross); the Domiracer; racing at Daytona and today's classic scene.

Norton: The Complete Illustrated History by Mick Woollett (2004). The Untouchable Norton is how racer Rem Fowler described his machine after winning the twin-cylinder class of the first TT in 1907. The company would use the phrase in advertising for the next 50 years. This book charts the history of one of the oldest marques in the world: both the glorious racing tradition and the production machines, from the first clip-on engines to the F1 rotary superbike. Interviews with those closely involved (including James Norton's daughter Grace, who provided original documents and photographs) make this the definitive account of a key contribution to motorcycle history.

The Unapproachable Norton by Mick Woollett (1979). This pictorial history starts with the 1902 motor cycle that first carried the Norton name, utilising the French-built Clement engine, and as the name Norton is so closely linked with motor cycle racing, the reader from then on has three-quarters of a century of motor cycling history unfolded before his eyes.

Roadholder: The Magazine Of The Norton Owners Club Various back issues.

The Classic Motorcycle Magazine Various back issues with articles on Nortons

Check for the manual you need from more Norton Manuals.