Matchless motorcycle books has numerous volumes on the history of this old British marque with some manuals.

Matchless is one of the oldest marques of British motorcycles with the first models manufactured at the start of the 20th century. 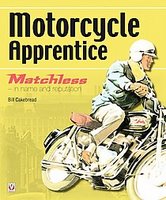 Motorcycle Apprentice: Matchless - In Name & Reputation by Bill Cakebread (2008). A young Londoner had one ambition in life - to work with motorcycles. That simple ambition led to an apprenticeship that was to change his life forever. The training by Associated Motorcycles Ltd enabled achievements that he never dreamed possible. This book gives a unique insight into the atmosphere and excitement of working in a motorcycle factory. It is an inspiring story, supported by period photographs and rare documents, and provides a fascinating record of work within the British motorcycle industry in the final years of its decline into oblivion. 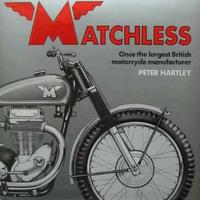 Matchless: Once The Largest British Motorcycle Manufacturer by Peter Hartley (1981). In the 1950s, the Matchless was one of the leading makes of British motorcycles and its position in the market seemed impregnable. The 'Matchbox' seemed to represent the very essence of British motorcycling at its best. This attempts to trace the decline of so prominent a make of machine in the general context of the story of the Matchless concern, from its humble beginnings as a family business to the largest-ever British manufacturer of motorcycles. 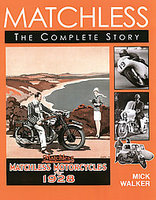 Matchless: The Complete Story by Mick Walker (2004). Matchless was one of the true pioneer motorcycle manufacturers. Their first machine was manufactured in London in 1899, and the company really came to prominence in 1907 with victory in the single-cylinder class of the first Isle of Man TT. Over the next seventy years, Matchless produced many distinguished bikes, from singles to magnificent four-cylinder machines. In 1931 Matchless acquired the ailing AJS concern, and the two companies were merged to form AMC - Associated Motorcycles. From then on Matchless and AJS machines became increasingly similar, and for a long time the machines of each mark were practically identical. Mick Walker's history of this famous marque takes in every machine and also looks at the competition fortunes of the company.

Check for the manual you need from countless Matchless Manuals dating from 1920 onwards.