AJS was the name used for cars and motorcycles made by the Wolverhampton, England company A. J. Stevens & Co. Ltd, from 1909 to 1931

AJS & Matchless The Postwar Models by Roy Bacon (1983). Lightweight and heavyweight singles and twins from 1945.

AJS : History Of A Great Motorcycle by Gregor Grant (1969) traces the history of AJS since the earliest days. Among the aspects of AJS covered are the days of the Stevens brothers, the acquisition of the company by the Colliers, the formation of AMC, and finally Norton Villiers, manufacturers of the exciting two-stroke Y Series 'Scrambler', with, like all preceding AJS machines, a racing background.

The Book of the AJS: A Complete Guide for Owners and Prospective Purchasers of 1932-9 AJS Motor-Cycles by William C Haycraft (1941). A practical guide covering all models from 1932-9. Dealing with every phase of the subject, including chapters on I.C. engine theory, carburation, lubrication, lighting equipment and overhauling.

The Book of the AJS: A Complete Guide for Owners and Prospective Purchasers of 1932-7 AJS Motor-Cycles by William C Haycraft (1941)

AJS Of Wolverhampton by Stephen Mills (1994) gives a detailed history of the AJS motorcycle. Packed with information plus many old photographs of the motorcycles, races, people involved and the works in Wolverhampton.

AJS Motor Cycles ( Single Cylinder ): A Practical Guide Covering Models From 1945 by F W Neill (1958) is a practical guide covering Singles models from 1945 to 1958 including Trials and Scrambles. 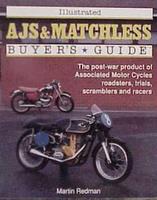 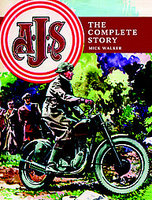 AJS: The Complete Story by Mick Walker (2005) is a comprehensive history of AJS. The first AJS was marketed in 1909, since then it built up an enviable reputation for high quality and great successes in all forms of competition, notably the Isle of Man TT, scrambling, trials and the ISDT. In 1929 the AJS held 117 world speed records. It was taken over by Matchless in 1931 and moved to London. During 1938 AJS, Matchless and Sunbeam marque were incorporated into AMC, in 1939 Walter Rusk, riding a liquid-cooled, supercharged V4 became the first to lap the Ulster GP circuit at over 100mph. This was followed by several other successes until the 1960s when AJS went into decline. A new range of two-stroke dirt bikes ensured it had considerable success well into the 1970s and survives into the 21st century