Singer was established by George Singer in Coventry to make bicycles in 1875, the company began manufacturing motorised three-wheelers in 1901, followed by motorwheels which were fitted to bicycles. 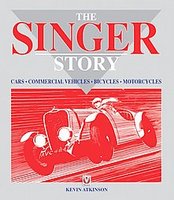 The Singer Story: Cars, Commercial Vehicles, Bicycles, Motorcycles by Kevin Atkinson (2008) is the definitive history of one of Britain's oldest, most important and influential car manufacturers. George Singer started building bicycles in Coventry in 1874 and by 1905 his company was building cars and motorcycles too.