Buick car books covers the history of the Buick company and all the Buick automobiles.

Buick originated as the Buick Motor Company, an independent motor-car manufacturer, and was incorporated in 1903, by David Dunbar Buick in Detroit, Michigan. It was taken over by William Durant and General Motors. 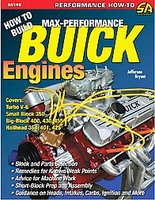 How To Build Max-Performance Buick Engines by Jefferson Bryant (2008).The first performance engine book ever published on the Buick family of engines. This book covers everything from the Nailheads of the '50s and early '60s, to the later evolutions of the Buick V-8 through the '60s and '70s, through to the turbo V-6 models of the '70s and '80s. 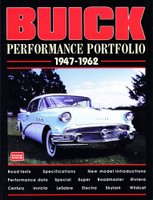 Buick Performance Portfolio 1947-1962 by R M Clarke (2000). The early post war Buicks retained early-40s styling but this had changed by 1950. These years were very successful years even if the products were not always at the leading edge of technology, performance or styling. The Dynaflow automatic transmission was ordered on some 85% of all new Buicks by 1951 although the overhead-valve V8 was not introduced until 1953. After the chrome-and-fins era in 1958 the early 1960s produced some well proportioned cars. In this compilation of road tests, driving impressions, specification and performance data and model introductions, the cars covered are: Dynaflow Buicks, 50-series Super, Roadmaster 41, Super Riviera V8, Century, Century Special, Roadmaster Special, Special Estate Wagon, Century Hardtop, Limited, Invicta, Electra, Electra 225, Le Sabre, Special, Skylark, Wildcat 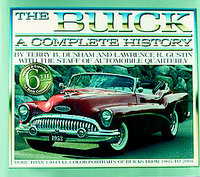 The Buick: A Complete History by Terry Dunham (1980). From 1904 to the present, this book is the authoritative, intimately fascinating story superbly told by two of the most respected automotive historians, each having devoted more than a decade to researching, interviewing, documenting and recording one of the great sagas of our time. Here is a book that has become the most treasured and inexhaustible reference work on this great marque. And now, to commemorate Buick's centennial, the new sixth edition expands to include information through model year 2004. Include chapters on Buick racing cars; the Buick in Hollywood; the custom-bodied Buick; the Royal Buicks; heraldry and mascots of the marque; Buick around the world, with new information on ventures into China. For the Buick builder, the enthusiast, the collector, the dealer and the owner, it will be the bible on Buick. 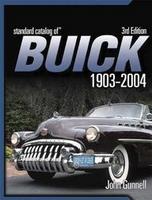 Standard Catalog Of Buick 1903-2004 by John Gunnell (2004). Celebrate 100 years of Buick history with this wonderful reference, including 20,000 model and price listings. Owners ofall types of Buicks and anyone with an interest in the cars willenjoy this comprehensive listing of every Buick ever built, with all new information on models from 2001-2004 now included. 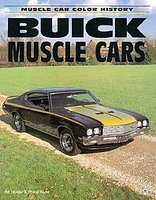 Walter L Marr: Buick's Amazing Engineer by Beverley Kimes (2007) is an excellent biography of Buick's brilliant and innovative Chief Engineer, Walter Lorenzo Marr. Deeply committed to 'valve in head' engines and other important elements, Marr's contributions made the Buick one of America's most desirable automobiles in the early part of the Twentieth Century. Extensively researched and illustrated, this volume is from the wealth of material in the Marr Family archives and essential for Buick enthusiasts and automotive historians. 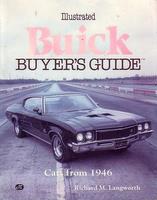 Buick: When Better Automobiles Are Built, Buick Will Build Them by Mitch Mayborn (1974) 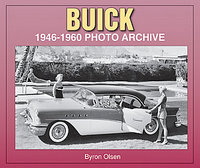 Buick: 1946-1960 Photo Archive by Byron Olsen (2006) highlights General Motors oldest division during some of its most successful and exciting years, 1946 through to 1960. When World War II ended in 1945, Buick was champing at the bit to forge ahead in the sales race with its reputation for size, prestige and straight eight cylinder power in every model. By 1954, Buick succeeded in reaching third place in sales, ahead of Plymouth. But after a few heady years among the sales leaders, some unfortunate styling decisions in 1957 and 1958 would topple Buick from the leadership pedestal. Share these heady days of growth and success for an American automotive icon with superb quality original factory photos from the time when Buick was one of America's most popular automobiles. Relive the arrival of 'ventiports', Dynaflow drive, sweep spears of chrome, and all of the other Buick trademarks that became part of the American lexicon. 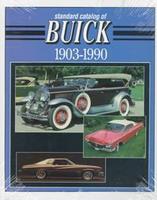 Standard Catalog Of Buick: 1903-1990 by Mary Sieber (1991) is a 'must-have' for any Buick enthusiast. It includes many articles written by recognized Buick historians. A complete year by year description of each model with specs and pictures. All the things you want to know about your Buick.

The Roadmaster was an automobile built by the Buick division of General Motors. Buick first used the Roadmaster name between 1936 and 1958.

The Buick Limited was an automobile built by the Buick Motor Division of General Motors between 1936 and 1942 and during model year 1958.

The Buick LeSabre was a full-size car made by the Buick division of General Motors from 1959 to 2005.

The Buick Invicta was a full-sized automobile produced by General Motors' Buick Motor Division from 1959 to 1963.

The Buick Riviera is an automobile produced by Buick from the 1963 to 1999. 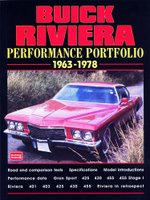 The Buick Wildcat was a full-size automobile produced by the Buick Division of General Motors from 1962 to 1970.

The Buick Skyhawk is an automobile that was manufactured by the Buick division of General Motors from 1975 through to 1989.

The Buick Centurion was sold by the Buick division of General Motors from 1971 through to 1973.

The Buick Regal is a mid-size car produced by General Motors beginning in 1973.

The Buick Somerset was a compact car produced by General Motors between 1985 and 1987.

Buick used the Estate name on their full-size station wagons. Estate Wagon was first offered on the 1940 Super model.

Check out the article on the History of Buick.