Pontiac car books include the history and development of the Pontiac company and automobiles.

Pontiac is a soon-to-be-defunct brand of automobiles first produced in 1926, and sold in the United States by General Motors.

Pontiac: They Built Excitement: The Story Of An American Automobile Company 1926 To 1992 by Thomas Bonsall (1991)

Pontiac: The Complete History 1926-1979 by Thomas Bonsall (1979). Excellent volume on the history and origin of the Pontiac, chapters on show cars, sales literature, commercial cars, portfolio of high performance cars and much more. 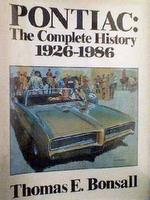 Muscle Pontiacs: The Years Of Excitement by Thomas Bonsall (1985)

Pontiac Since 1945 by Richard Busenkell (1989) thoroughly covers the post-war history of Pontiac. 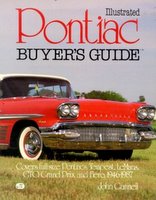 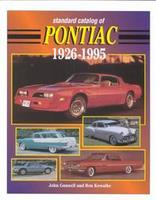 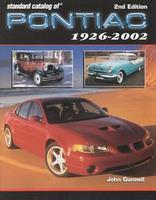 Standard Catalog Of Pontiac 1926-2002 by John Gunnell (2002). Every Pontiac model ever made from 1926 to 2002 is listed, along with the predecessors to Pontiac, the Oakland cars produced from 1908-1931. Collectors will enjoy seeing such models as Silver Streaks, Bonnevilles, Catalinas, Tempests, GTOs, Firebirds, Fieros, Trans Ams, Grand Prixs, Grand Ams, Trans Sports, Can Ams, Venturas, Sunbirds, Sunfires and Aztecs. 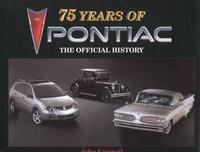 75 Years Of Pontiac: The Official History by John Gunnell (2000). From the Chief of the Sixes and Silver Streaks to the famed GTO, Firebird and Trans Am, this full-colour reference chronicles the rich 75-year history of Pontiac from its introduction in 1926 through the 2000 Aztek. 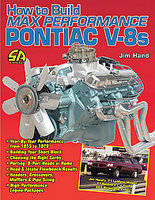 How To Build Max Performance Pontiac V8s by Jim Hand (2004) begins with a year-by-year timeline, tracing Pontiac performance packages from 1955 through to 1979, and then moves on to chapters on bottom end parts, and cooling, oiling, and ignition systems. He has also included special sections on the available carburetors including Tri-Powers, Q-Jets, Thermoquads, and AFBs, as well as detailed information on head porting and exhaust systems, featuring quantitative flowbench and drag-strip results. 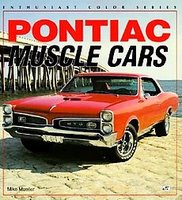 Pontiac: 1946-1978 The Classic Postwar Years by Jan Norbye (1993). A comprehensive, year-by-year account. Early Pontiac history and design traditions, some of the major players in the design and marketing of Pontiac, technical innovations, specs, photos and technical drawings of engines and other systems, detailed discussions of design changes over time (and how these changes were received by the public), and loads of information charting every variation of car that came off the Pontiac line.

Pontiac: The Performance Years Volume 2 by Martin Schorr (1984) gives good accounts of the GTO and Firebird's best years but unlike most books it also covers the full-size Pontiacs as well. Good coverage is found on the Royal cars, the Super Duty engines (including the early '63s) and Pontiac Drag Racing. 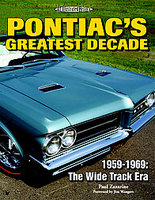 Pontiac's Greatest Decade 1959-1969: The Wide Track Era by Paul Zazarine (2006) captures the energy and the dynamic force of personality that ignited the spirit of Pontiac Motor Division and all of its employees, from designers and engineers to assembly line workers and dealers.

The Pontiac 6000 was a mid-size car introduced by the Pontiac division of General Motors in 1981.

The Pontiac Acadian, was a version of the Chevrolet Chevette sold in Canada from 1967 to 1987.

The Pontiac Astre was introduced in 1974 and was sold in the US for the 1975-1977 model years. Pontiac's version of the Vega had been sold exclusively in Canada from 1973.

The Pontiac Bonneville is an automobile built by the Pontiac division of General Motors from 1957 to 2005.

The Pontiac Catalina was part of Pontiac's full-sized automobile line from 1950 to 1981.

The Pontiac Chieftain was an automobile produced by the Pontiac Motors Division of General Motors from 1949 to 1958.

The Pontiac Custom S was only available for the 1969 model year.

The Pontiac Executive was an automobile model produced by the Pontiac Motor Division of General Motors from 1967 to 1970.

The Grand Safari was Pontiac's top-of-the-line full-size station wagon offered from 1971 to 1978.

The Pontiac Grand Ville was the top luxury car in the division's full-sized line from 1971 to 1975.

The Pontiac LeMans was a model name for compact and intermediate-sized automobiles offered by the Pontiac from 1962 to 1981.

The Star Chief was a car built by General Motors' Pontiac division between 1954 and 1966.

The Pontiac Sunbird, was produced by the Pontiac division of General Motors from 1975 to 1994.

Pontiac Tempest was a compact automobile produced by the Pontiac in 1960 until 1972.

The Ventura was first introduced in 1960 as a classier version of the Pontiac Catalina.