Pierce-Arrow was an American automobile manufacturer founded by George N Pierce, based in Buffalo, New York, which was active from 1901-1938. Although best known for its expensive luxury cars, Pierce-Arrow also manufactured trucks, fire engines, motorcycles and bicycles.

There Is No Mistaking A Pierce-Arrow by Brooks T Brierley (1979) is the story of the Pierce-Arrow automobile and the company that manufactured it, all set against the background of the times of which it was an important part: the turn of the century, World War 1, the Roaring Twenties and the Depression. The book also includes rarely seen photographs.

Woodrow Wilson's Pierce-Arrow: The Story Of The President's Car Exhibited At His Birthplace by Katharine L Brown (1990) 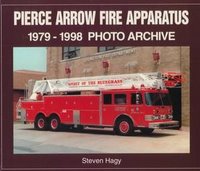 Pierce-Arrow: First Among America's Finest by Maurice D Hendry (1971). A title in the famous Ballantine series produced during the 60's & 70's. This is a relatively scarce title in the car marque series. Illustrated history of the Pierce-Arrow automobile, one of the most famous American automobiles of the Jazz Age. Maurice Hendry has written many magazine articles on US automobile history. He belongs to the Pierce-Arrow Society, the Veteran and Vintage Car Club of New Zealand and owns a 1934 Pierce-Arrow.

Advertisement For 1906 Pierce-Arrow Automobile (1906). This is an original advertisement for the 1906 Pierce-Arrow, including a list of dealers, in a 1906 issue of McClure's Magazine. These cars were the first official cars of the White House when two were ordered by President Taft in 1909 and were considered status symbols, being owned by John D Rockefeller, Babe Ruth, Tom Mix, Ginger Rogers and Ransom E Olds. The company ceased production in 1938 after selling five of its Silver Arrows for $10,000 each in 1933.

The Great Arrow (1907) featuring a red and black Pierce-Arrow, filled with smartly dressed men and women, with an expansive golf course in the background. From a Harper's Weekly magazine. 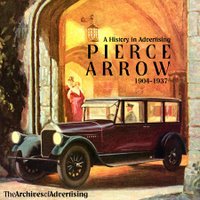 The History Of One Fine Car Through Its First 30 years. And Now the Finest of the Fine Cars of Today (1936). 12 page sales brochure folded accordian-style. One side gives a brief history of the Pierce-Arrow company, illustrated with pictures of the company's automobiles through the years. The other side is devoted to the company's then current models, with description and photographs of the Metropolitan Town Car, Five-Passenger Club Sedan, Enclosed Coupe, Convertible Coupe-Roadster and Five-Passenger Sedan. 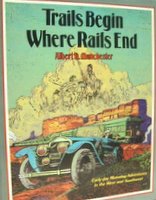 Trails Begin Where Rails End by Albert D Manchester (1987) heralds the hardy pioneers in locomobiles, Pierce-Arrows and Cadillacs who took to the sagebrush in search of what passed for roads, camped out and became the pioneer automobile tourists. 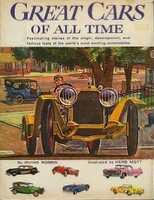 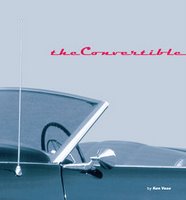 The Convertible: An Illustrated History Of A Dream Machine by Kenneth E Vose (1999) is a fascinating tribute to the glamour, style and allure of life with the top down. Includes classic Pierce-Arrows, Packards, Duesenbergs, Corvettes and many more. "With this witty history and lore are more than 125 photographs, illustrations, and other memorabilia - including rarely seen vintage photos and art created specifically for this volume."