Chevrolet Camaro car books cover the history of the Camaro and everything you need to know to restore this automobile.

The Chevrolet Camaro is an automobile manufactured by the Chevrolet division of General Motors since 1967.

Camaro White Book 1967-2002 by Mike Antonick (2004) includes all Camaros from the first 1967s to the last models built in 2002. It includes thousands of Camaro facts, window-sticker prices, options and option codes, exterior and interior colours and codes, production volumes, and compilations of those little details that make each model unique. Presented in a precise, year-to-year format, this book puts real expertise at the fingertips of Camaro enthusiasts.

The Genuine Camaro White Book 1967-1997 by Mike Antonick (1996) is full of great facts and information for decoding your Camaro's VIN and options.

The Genuine Camaro White Book 1967-1985 by Mike Antonick (1985) is a vital tool in the search for your Camaro, lots of information including pictures of each model, production figures, options, colour codes and everything you need! 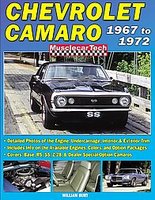 Camaro Performance Portfolio 1993-2000 by R M Clarke (2001). Covering the latest models, this book is packed with the best of the material written on 1993-2000 Camaros. Included are colour photos as well as road, comparison and long-term tests, model introductions, specifications and performance data on the automatic, 6-speed manual, Z28, 1LE, SS, Convertible, and Callaway Supernatural C-8. 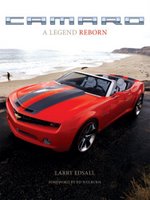 Camaro: A Legend Reborn by Larry Edsall (2009) chronicles the rebirth of this legendary car. With drawings and photographs of prototypes and pre-productions vehicles, and in interviews with engineers, designers, and key executives, the book follows each step of the process that led to Camaro's triumphant return. 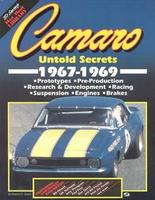 Camaro: Untold Secrets 1967-1969 by Wayne Guinn (2001). Get the inside story on performance Camaro development during the prime years of 1967-69, from the people who lived it - at the factory and with the Penske team. Details about the special engines, transmissions, rear ends, and handling packages are included, as well as private company memos and mysterious parts and activities never before made public. 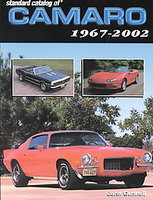 Standard Catalog Of Camaro 1967-2002 by John Gunnell (2002). Relive the 35-year history of the Chevy Camaro with this book's colour photos, facts and up-to-date collector-market values. 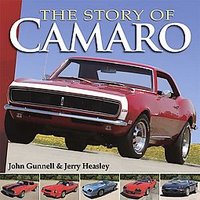 The Story Of Camaro by John Gunnell (2006). Coverage of every model, from the groundbreaking 1967 Camaro to the final Camaro of 2002. Includes production figures and brilliant photos to help with accurate identification. Up-to-date collector pricing from Old Cars Price Guide magazine, one of the hobby's best price resources. 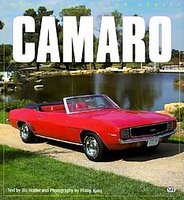 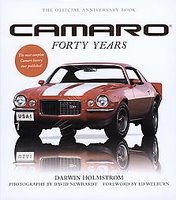 Camaro: Forty Years by Darwin Holmstrom (2007) chronicles the Camaro's rich history, from the initial attempts to reach the youth market in the early 1960s, through the potent and turbulent years of the classic muscle-car era, the resurgence of muscle in the 1980s, and the car's triumphant rebirth in a new millennium. 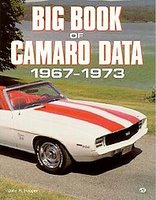 Big Book Of Camaro Data 1967-1973 by John Hooper (1995). Filled with data, this book covers all of the most collectible Camaros - the famous 1967-73 models. All of the information you're looking for is in here, including model codes, serial numbers, specs, options, prices, engines, paint colors, interior and exterior details, and a whole lot more! 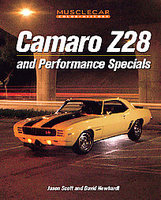 Camaro Z28 And Performance Specials by Jason Scott (2003). The Camaro is immortalized in this exciting look at the high-performance models that have made the Camaro a performance car icon. Features extensive research, incredible photography, and More...cutting-edge information. 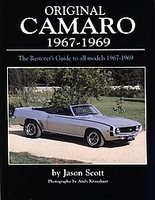 Original Camaro 1967-1969: The Restorer's Guide by Jason Scott (2002) is written and designed for enthusiasts attempting to determine which parts, accessories and colours will restore their first-generation Camaro to factory-original condition. 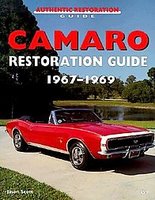 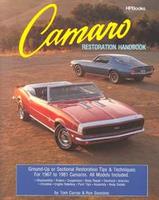 Camaro Restoration Handbook by Ron Sessions (1990). How to maintain, repair and restore all models of Camaros with specification, part numbers and related information. 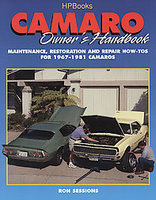 Camaro Owner's Handbook by Ron Sessions (1999). This essential guide for owners of the first and second generations of these ponycars includes step-by-step photo how-tos that make it easy to complete over 30 repair, maintenance, restoration, and upgrade projects in a single weekend or less. 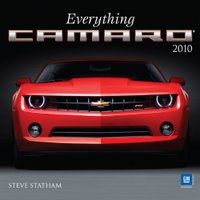 Everything Camaro 2010 by Steve Statham (2009) features 40 years of favourite models including the Z28, ZL-1, SS and IROC-Z. Contains dazzling color photography of the choicest Camaros, accompanied by supplemental images from the GM archives and informational text covering the history of Chevy's infamous pony car. 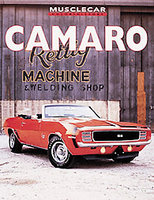 Camaro: Muscle Car Color History by Steve Statham (1998). This generously illustrated colour history relates the story behind the automobile that was conceived More...to steal a share of the market dominated by the Ford Mustang. 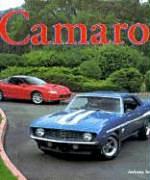 Camaro by Anthony Young (2000) examines the evolution and development of four generations of Camaro, including corporate research and development, manufacturing and marketing. Young reveals the changing body styles of Z/28s, 350s, the SS396, Berger, Yenko, LT-1 and IROC Z Camaros. Rounding out Camaro's legendary history is coverage of its involvement and successes in racing.

Check for the manual you need from many Chevrolet Camaro Manuals