Chrysler car books cover the history and development of the Chrysler automobile company including biographies on Walter Chrysler and Lee Iacocca.

Chrysler was founded by Walter P Chrysler on June 6, 1925 when the Maxwell Motor Company (est. 1904) was re-organized into the Chrysler Corporation. 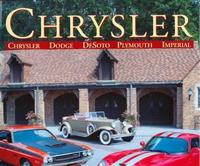 Chrysler by Dennis Adler (2000). The story includes model from Doge, Plymouth, Imperial, and DeSoto, while sidebars highlight key figures and stunning feats of engineering and styling.

The Birth Of Chrysler Corporation And Its Engineering Legacy by Carl Breer (1994) details the many firsts in automotive history that were developed by the Chrysler Corp. Sealed beam headlights, fluid Drive, first unit body car in the 1934 Airflow and many other things that we take for granted in modern cars today.

Life Of An American Workman by Walter Chrysler (1950). The story of the man who built the first Chrysler car in 1923 and made it into the fifth largest seller in the industry by 1927.

Chrysler: The Life And Times Of An Automotive Genius by Vincent Curcio (2000) is a richly detailed account of one of the most important men in American automotive history, based on full access to both Chrysler Corporation and Chrysler family historical records.

The Chrysler Heritage: A Photographic History by Michael Davis (2002) follows the fortunes of the company, its founders and its products for over a century. Through its acquisition of Dodge and the introduction of Plymouth and DeSoto, Chrysler rose quickly. Renowned for its advanced engineering, it surpassed mighty Ford Motor Company for second place in sales after GM in 1933. Showcasing photographs from the Chrysler archives along with in-depth captions, this new book captures the muscle of Detroit, including the corporation's unparalleled involvement in the Second World War and the Cold War.

Iacocca: An Autobiography by Lee Iacocca & William Novak (1984). He's an American legend, a straight-shooting businessman who brought Chrysler back from the brink and in the process became a media celebrity, newsmaker, and a man many had urged to run for president.

Behind The Wheel At Chrysler: The Iacocca Legacy by Doron Levin (1996). When the Chrysler Corporation teetered on the verge of bankruptcy in 1979 and 1980, a business folk hero was born: Lee Iacocca. Ignominiously fired as president of Ford Motor Company, Iacocca appeared vindicated as he led Chrysler to a miraculous recovery.

Guts: The Seven Laws Of Business That Made Chrysler The World's Hottest Car Company by Robert Lutz (1998). With wit and a surprising frankness, Lutz tells how Chrysler in the early '90s recovered from a second near-death experience to go on and post record profits

Going for Broke: The Chrysler Story by Michael Moritz & Barrett Seaman (1981) is a history of Chrysler, from the days of Walter Chrysler through the postwar economic gloom to the grim present (at publication), where the company's future rests on an uneasy coaltion of businessmen, labour leaders, bankers and legislators. It is also a detailed examination of the complex, interlocking structure of American business and government policy. Most of all, it is the inside story of the drama that began to unfold when Lee Iacocca entered Chrysler's Detroit headquaraters, took control, and began the final battle for Chrysler's survival. 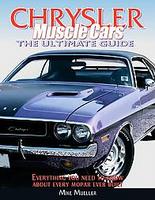 Chrysler Muscle Cars: The Ultimate Guide by Mike Mueller (2006). From the 1955 Chrysler C300 to the Duster in the late 1970s, with complete production figures, option lists and original prices, details on the endless array of Chrysler Corporation engines, and more than 200 colour photographs.

Taken For A Ride : How Daimler-Benz Drove Off With Chrysler by Bill Vlasic & Bradley Sterz (2000) follows the twists and turns in the road to DaimlerChrysler and, in the end, emerges as a cautionary tale of the risks and rewards of going global.

Wheels On Fire by David Waller (2001). The inside account of the Daimler-Benz takeover of the Chrysler Corporation, a historic merger that has become a test case for business in the 21st century.

The Critical Path: Inventing An Automobile And Reinventing A Corporation by Brock Yates (1996). The story of how Chrysler's minivan team created an automobile that captured the 1995 Motor Trend Car of the Year and other major awards - and reinvented a perilously entrenched corporation in the process - is as dramatic and inspiring a story as any in business today.

Who's Who Everywhere (1926). Being a partial list of prominent persons who own and drive Chrysler cars the world over and what many of them think of the fine cars they own and drive. Fascinating, Social Register-style compilation of prominent individuals from all walks of life, with their positions or occupations, and the number and models of Chryslers they own and drive. Postage-stamp-size photographs of one or two on each page. An impressive list, of about 500 interesting and illustrious persons, all the more remarkable as Chrysler had just begun production in 1924.