The Elcar was an American automobile manufactured from 1915 until 1931. The car was produced by the Elkhart Carriage Company of Elkhart, Indiana. 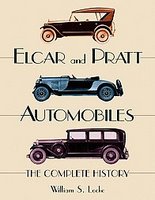 Elcar And Pratt Automobiles: The Complete History by William Locke (2007). Elcar once ranked among the finest vehicles on American roads. Ultimately done in by weak distribution and the ravages of the Depression, Elcar today stands as an example of an ambitious company that transformed itself into a respected car manufacturer in the early days of the automotive age. This remarkably exhaustive history, researched over several decades from all available sources, including interviews with former Elcar employees, details every Elcar model and the Pratt vehicles that preceded them, as well as the personalities behind the cars. Extensive appendices provide a complete model history, with specifications; a full corporate chronology; an illustrated accounting of all Elcars and Pratts known to survive whole or in part today; a roster of company employees; a descriptive list of all ads and brochures ever produced by the company; and a wealth of other data that can be found nowhere else.