Cunningham Sports car books cover the history of Briggs Cunningham and his cars.

Cunningham: The Life And Cars Of Briggs Swift Cunningham by Dean Batchelor (1993) is the biography of a man, his cars and his racing exploits. He made his name racing automobiles from Sebring to Le Mans. He built his own line of Cunningham Sports and Racing Cars.

Cunningham Automobiles 1951-1955 by R M Clarke (1993). These cars were the fulfillment of a dream for Briggs Cunningham. Two years before the Corvette Cunningham had built the C1 with Chrysler's hemi-head V8 and a tubular chassis. The C2 was entered in the 1951 Le Mans and a road version came in the same year. The C3 had a touring body by Vignale but Cunninghams never sold in large enough quantities and the operation was closed down during 1955. This is a book of contemporary road tests, specification and technical data, model introductions and race reports. Models covered include:- C2, C3, C4R, C4RK, C5R, C6R, Continental CoupT and Convertible. 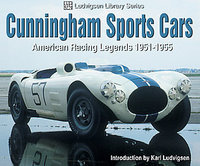 Cunningham Sports Cars: American Racing Legends 1951-1955 by Karl Ludvigsen (2003) Briggs Cunningham began in 1951 with his Chrysler-powered C-2 sports-racers and in 1952 launched the production C-3, a Vignale-bodied car built as both a coupe and cabriolet. Some two dozen were made. The C-4R was his 1952 racer, still Chrysler-powered, which performed well at Le Mans and with Phil Walters and John Fitch was all but unbeatable in American racing. Radical with its solid-axle front end and colossal drum brakes, the C-5R of 1953 was a challenger to the Jaguars at Le Mans. In 1954 Cunningham raced a much-modified Ferrari with water-cooled brakes and in 1955 introduced his C-6R, beautifully engineered by Briggs Weaver and Offenhauser powered.