Ford Falcon car books cover the development of the Falcon in the US and Australia.

Ford Falcon Performance Portfolio 1960 - 1970 by R M Clarke (1998). The Falcon was introduced in 1959 as a compact line to combat European imports. Originally it depended on simple styling and engineering with an unexciting engine. The Futura was introduced as a sporty model with a 260 V8 engine to compete with the Chevy Corvair Monza. In 1965 it was upgraded to the 289 V8 and a new larger body design that lasted until 1970. This is a book of contemporary road and comparison tests, driver's impressions, specification and technical data, design development, new model introductions, engine swap. Models covered include: Wagon, Fordor Sedan, Futura, Futura Convertible, Futura V8, Sprint Coupe, Holman-Moody V8, 6, Futura Club Coupe, Futura Sports Coupe, Ranchero V8, Futura Station Wagon.

The Ford Falcon Story: An Illustrated History by Geoff Easdown (1989) is the story of Australia's number one car. 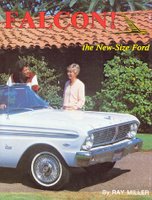 Falcon! The New-Size Ford by Ray Miller (1982). During the 1950's, American cars were caught up with competitive growth in size. As each successive model appeared, it resembled the previous ones, but never was shorter or lighter.

Check for the manual you need from many Falcon Manuals


50 Years Of Ford Falcons in Australia