General Motors, often known as GM, is a US automaker founded by William C. Durant in Flint, Michigan in 1908.

Giant Enterprise: Ford, General Motors And The Automobile Industry by Alfred Chandler (1964) provides documentary records of the historical progression of the automobile industry - its marketing techniques and strategies with statistical reports and critical analysis.

Strictly Business: Walter Carpenter At Du Pont And General Motors by Charles Cheape (1995). From 1919 to 1962 Walter Carpenter exemplified the establishment professional - the manager who produced nothing himself but who oversaw everything in the company and much in the community. A successful chief executive officer at the Du Pont Corporation and an important director at General Motors, Carpenter personified the power and status many American executives dreamed of winning.

Chrome Colossus: General Motors And It's Time by Ed Cray (1980). The first comprehensive and objective biography of an industrial institution that has shaped the way we have lived our lives, planned our cities and expended our national wealth for over seventy years.

General Motors: A Photographic History by Michael Davis (1999) explores the growth of the company in a series of over 200 black-and-white images. From the first assembly line to post-Second World War recovery, images from the world auto shows and the consequent re-organization of GM take the reader on an intriguing visual tour of a tremendously important era in the industrialization of America.

Sloan Rules: Alfred P Sloan And The Triumph Of General Motors by David Farber (2002) reveals the GM genius as not only a driven manager of men, machines, money and markets but also a passionate and not always wise participant in the great events of his day.

Sit-Down: The General Motors Strike Of 1936-1937 by Sidney Fine (1969) studies the most significant American labour conflict of the 20th century.

The Struggle For Control Of the Modern Corporation: Organizational Change At General Motors 1924-1970 by Robert Freeland (2005) examines the changes in the General Motors organization between the years 1924 and 1970. He takes issue with the well-known argument of business historian Alfred Chandler and economist Oliver Williamson, who contend that GM's multidivisional structure emerged and survived because it was more efficient than alternative forms of organization.

The Leadership Genius of Alfred P Sloan: Invaluable Lessons On Business, Management And Leadership For Today's Manager by Allyn Freeman (2005) explains why Sloan's principles have stood the test of time, remaining the basic building blocks of effective managerial leadership in organizations large or small. He demonstrates how these innovative principles are playing out in business today, taking you through their successful application at GM and distilling lessons that all managers can use as guideposts in their business.

Billy Durant: Creator Of General Motors by Lawrence Gustin (2008). A fascinating book and a sympathetic look at the man who glued General Motors together and in the process made Flint one of the great industrial centers of America.

Ernie Breech: The Story Of His Remarkable Career And General Motors, Ford And TWA by J Mel Hickerson (1968)

Why GM Matters: Inside The Race To Transform An American Icon by William Holstein (2009) goes deep inside GM to show what's really happening at the country's most iconic corporation.

A History Of General Motors by Timothy Jacobs (1992)

Rude Awakening: The Rise, Fall And Struggle For Recovery Of General Motors by Maryann Keller (1989) traces GM through the '70s and '80s, dealing with Japanese competition, developing the Saturn, buying Ross Perot's EDS, etc. Very lively and readable. She concludes GM has weathered severe crises but still faces much uncertainty. Relevant to read 20 years later as GM teeters toward bankruptcy, propped up by government loans.

GM Passes Ford 1918 - 1938: Designing The General Motors Performance-Control System by Arthur Kuhn (1986). A planning and operations oriented book, discussing how GM utilized a performance oriented approach to the business and the organization and Ford did not.

Call Me Roger: Story Of How Roger Smith, Chairman of General Motors, Transformed The Industry Leader Into A Fallen Giant by Albert Lee (1988)

Irreconcilable Differences: Ross Perot Versus General Motors by Doron Levin (1989) is an account of the clash between two corporate tycoons. Ross Perot founded the multibillion-dollar computer company. He was approached by General Motors in 1984 as a takeover target. He accepted the offer and was then ousted from the company in a ruthless battle.

Collision Course: Inside The Battle For General Motors by Micheline Maynard (1995) traces the efforts of GM chairman Jack Smith to restore the company to profitability through reductions in its workforce and factories and the battles between Smith and other GM executives for control of the company's strategy.

A Ghost's Memoir: The Making Of Alfred P Sloan's My Years With General Motors by John McDonald (2002) tells the behind-the-scenes story of the book's writing, its attempted suppression and the lawsuit that eventually led to its publication.

Forty-One Years With General Motors And A Little Before And After by A M S Morgan (1992). When in 1928, A M S Morgan walked into the Chevrolet plant in Georgia, just wanting to work a few days to earn the money to get to Texas, he could not have known that this would be the start of a lifelong adventure throughout the country with one of the Big Three automakers in the glory years of the industry. A story of people and places as well as automaking, this autobiography is full of good times and sad. Here is entertaining reading about one of the grand old men of one of America's grand old industries 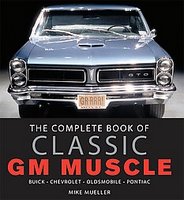 The Complete Book Of Classic GM Muscle by Mike Mueller (2008) covers over 40 years of high performance with an in-depth look at prototypes and experimental models, anniversary and pace cars, and specialty packages for street and competition driving. With extensive details, specs, and exclusive archival photographs, this book is the ultimate resource on America's muscle cars.

Billy, Alfred And General Motors: The Story Of Two Unique Men, A Legendary Company And A Remarkable Time In American History by William Pelfrey (2006). The tale not just of the two extraordinary men but also of the formative decades of twentieth-century America, through two world wars and changes in business, industry, politics and culture. The book includes vivid, warts-and-all portraits of the legends of the golden age of the automobile, from Crazy Henry Ford, Ransom Olds, and Charles Nash to the brilliant but uncredited David Dunbar Buick and Cadillac founder Henry Leland.

General Motors Styling 1927-1958: Genesis Of The World's Largest Design Studios by Tracy Powell (2007). From its beginning in 1927, Harley Earl forged a new and unknown activity within GM into a strong and vital styling organization. During that time, the look of the automobile was dramatically transformed from its early carriage-like architecture into a motorcar with pleasing lines, appealing form and graceful proportions.

My Years With General Motors by Alfred Sloan (1996). This story, told by a business leader, is a distillation of half a century of leadership experience within a giant industry and an inside look at the dramatic events that led to the company's success. The reader will learn the art of management by one who perfected it. 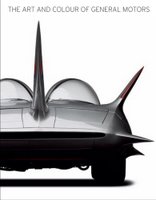 The Art And Colour Of General Motors by Jonathan Stein (2008). Celebrating design excellence that has stirred the American imagination for decades, this superbly produced volume showcases the cars that created General Motors' legacy for the past 100 years, including the 1950's Motorama dream cars that defined a generation. 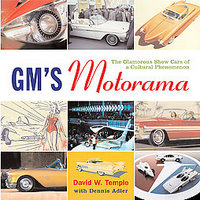 GM's Motorama: The Glamorous Show Cars Of A Culture by David Temple (2006). In the postwar exuberance of America, General Motors launched their Motorama, an all-out extravaganza that turned the marketing of new cars and designs into a cultural event of national proportions.

Dream Maker: William G Durant, Founder Of General Motors by Bernard Weisberger (1979). A biography of Durant, the daring entrepreneur carriage-maker who purchased the faltering Buick Motor Company. After merging Buick and Oldsmobile to create General Motors in 1908, he purchased a number of parts makers, created Chevrolet and struck an alliance with the DuPont Company. He then repeatedly took business risks which proved fatal as car-making moved from the pioneering days of trial and error into an era of management by slide rule.

On A Clear Day You Can See General Motors: John Z DeLorean's Look Inside The Automotive Giant by J Patrick Wright (1979). Published without the cooperation of John De Lorean, this account written by De Lorean after his resignation from General Motors in 1973 brings to light shocking disclosures about the corporation's questionable inner workings.

Every Purse And Purpose: General Motors And The Automotive Business by John Wysner (1994). The story of the evolution of business that was mainly due to the automotive industry.